America was founded on the concept that individuals have the right to amass private wealth. Not just a little wealth. Massive wealth. The kind of wealth that makes a monarch on the other side of the ocean notice and want a cut. Ya ya ya, there was some stuff in the Declaration of Independence about all men being created equal and having the right to life, liberty and the pursuit of happiness, but all that was icing on the cake. The cake itself was a bunch of small business owners who didn’t want the King of England taking a cut of their hard-earned profits in the form of taxes.

No other country in history has ever been forged on such material concepts from the jump. Capitalism and the right to earn an income (large or small) without government or church interference is woven directly into the fabric of our founding documents and societal DNA.

YES we now pay taxes to the government. But the IRS wasn’t formed until 1862. We didn’t start paying property taxes until 1913, when Congress passed the 16th Amendment – the right to impose a Federal income tax. Property taxes are extremely strange. Why do you need to pay an annual fee to own something that you bought? I guess we need police and roads and fire departments and armies… but none of these taxes are in the initial framework of the United States of America.

This unique foundation is precisely the reason America is the richest country in the world today. It’s why people from all over the world are desperate to land on our shores where they can take their shot at the American dream. A dream that has produced some of the largest personal fortunes in modern history.

As I type this right now, eight of the ten richest people in the world are Americans. Two of those eight – Google’s Sergey Brin and Tesla/SpaceX’s Elon Musk – are immigrants to America. They are two of countless examples of immigrants who landed on America’s shores eager to take their shot.

How do today’s tech tycoons match up net-worth-wise with their industrial age predecessors? For example, how does Mark Zuckerberg’s current $100 billion net worth compare to the inflation-adjusted net worth of Rockefeller, Carnegie, and Vanderbilt? 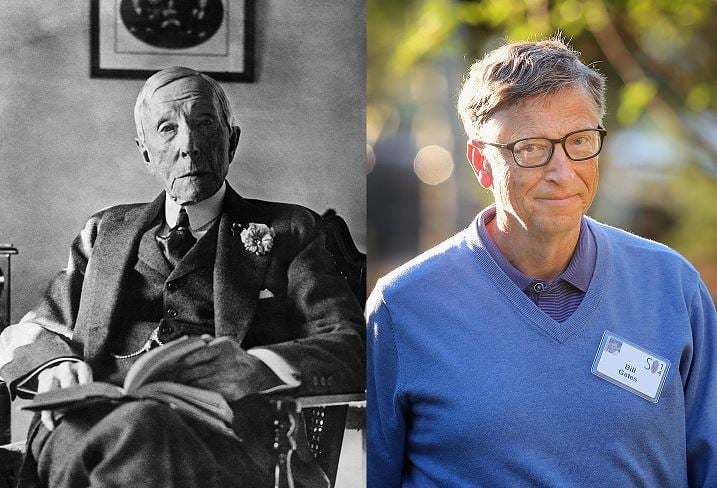 The Richest Americans of All Time

The Oracle of Omaha made his billions as the Chairman of Berkshire Hathaway, a holding company that owns interests in a wide variety of industries. Berkshire owns GEICO, Fruit of the Loom among thousands of other companies and investments. Berkshire is one of the largest owners of Apple. As of this writing, Warren Buffett’s net worth is $88 billion but there’s a caveat with Mr. Buffett’s wealth. Much like Bill Gates further down this list, Warren intends to give the majority of his fortune to charity before he dies and he’s actually already given away around $40 billion. Had he not done that, today he very likely could have had a net worth of roughly $130 billion. Enough to jump a few spots in this list.

After the Civil War, Friedrich Weyerhaeuser started a lumber company and eventually went on to acquire over two million acres of land making him one of the biggest private landowners in the US. His timber venture was extremely successful, earning Weyerhaeuser a personal net worth of over $80 billion in today’s dollars.

Irish born Alexander Turney Stewart, aka A.T. Stewart, founded the very first department store in New York City which would go on to become the largest retail store in the world for its time. In 1869 alone Stewart’s net worth was estimated at over $1 million and when he died in 1876 his fortune was worth $90 billion in 2012 dollars!

Originally from France, Stephen Girard made his fortune in shipping and eventually banking. The oldest person on our list of richest Americans, Girard was born in 1750 and died in 1831. At the time of this death, Stephen Girard’s was the richest man in America with a net worth of $105 billion! He died without heirs and donated a large portion of his fortune to charity.

Mark famously founded thefacebook.com from his Harvard dorm room in 2004. Sixteen years later the company is so large that multiple government agencies are calling for its breakup. People see Mark as a modern day Rockefeller. A man who built an empire, then used his empire to kill competition and kind of ruin the world. However you feel about Mark or the product that made him famous, Facebook, there’s no denying his success. As of this writing he is worth $100 billion, but his net worth has topped $120 billion as recently as September 2020.

John Jacob Astor made his first fortune by dominating the fur trade in America. Astor then used his vast financial resources to acquire real estate in New York City including what would eventually become The Waldorf Astoria hotel. Astor was the first multi millionaire ever in America and at the time of his death in 1848 had a net worth equal to $121 billion in today’s dollars.

For a brief moment in 1999, at the absolute peak of the dotcom bubble, Bill Gates net worth topped $100 billion. When adjusting for inflation, that’s the same as $156 billion in today’s dollars. As of this writing, his non-inflation-adjusted net worth is $134 billion. That’s enough to make him the sixth-richest American ever, but there’s a major caveat. Like his good buddy Warren Buffett, Gates has pledged to donate the majority of his wealth to charity during his lifetime and has actually ALREADY DONATED $50 billion. Had Bill been more of a selfish miser, today he would be worth $206 billion.

See also: Mark Zuckerberg on how to be a multi-billionaire and not raise spoiled kids

Cornelius Vanderbilt made an early small fortune running steamboats but didn’t come into his vast wealth until he was he invested in railroads at the age of 70. He used his money to start Vanderbilt University and his descendants still own vast real estate in New York City. One of those descendants is CNN anchor Anderson Cooper. Cooper is Vanderbilt’s great-great-great-grandson. Cooper has claimed that he did not receive any money connected any trusts related to his famous patriarch. At the time of his death in 1877 Cornelius Vanderbilt had amassed a net worth of $185 billion in today’s dollars.

Jeff Bezos is the founder, chairman, CEO, and president of Amazon.com. He single-handedly changed the way the world shops. He famously wrote the business plan for Amazon while driving across country with his wife after giving up a high-paying investment banking job to take his shot at the burgeoning World Wide Web. Jeff first surpassed Bill Gates to become the richest person in the world in July 2017. He was the uninterrupted richest person in the world from October 2017 through January 2021 when he was surpassed by Elon Musk. Though, it should be noted that at the point he was surpassed, Jeff’s $195 billion net worth was missing around $60 billion worth of wealth that was lost when he divorced ex-wife MacKenzie Scott. Had Jeff Bezos never divorced, he would be on this list at $256 billion.

Elon was born in Pretoria, South Africa in 1971. He became a US citizen in 2002. Elon earned his first significant fortune as one of the co-founders of Paypal. He sunk that fortune into two companies: Telsa and SpaceX, nearly going bankrupt in the process on several occassions. As of this writing he owns 22% of the publicly traded Tesla and 48% of SpaceX. Tesla’s story between 2018 and 2021 is nothing short of remarkable. The stock had been battered and clobbered. At one point it was the most-shorted stock in the world. Then in 2020 it took off like a SpaceX rocket. Elon started 2020 with a net worth of $28 billion. He ended 2020 worth $170 billion. A week into 2021, his net worth increased $40 billion to $210 billion. During that week Elon surpassed Jeff Bezos to become the richest person on the planet.

At the peak of the steel boom, Andrew Carnegie invested heavily in steel companies which paid off handsomely. Eventually Carnegie became the head of US Steel, which catapulted him to the upper echelons of American wealth. In 1901 Andrew sold his company to banker J.P. Morgan for $480 million which was paid in interest-bearing bonds that were housed in a bank that was built specifically to protect the bonds. At the time of his death in 1919, Andrew Carnegie was worth the equivalent of $310 billion in today’s dollars making him the second richest American to ever live. After selling his company, he dedicated the remainder of his life to philanthropy. He gave away his entire fortune, funding major hospital systems and schools that still operate today. According to legend, he did not initially intend to give a dime away but changed his mind after feeling guilty about for contributing to the harsh working conditions for the steel works that made him enormously rich.

John D. Rockefeller was not only the richest America who ever lived but also one of the richest human beings in the history of the world with a net worth equivalent to $340 billion in today’s dollars when he died in 1937. John D. Rockefeller was the founder of Standard Oil and eventually controlled over 90% of all the oil in the United States. Standard Oil was broken up by the US government for being a monopoly and was eventually broken up into what eventually became Amoco, Chevron Conoco, and ExxonMobil. Fun lesson for Mark Zuckerberg and the Google guys, Rockefeller’s fortune soared AFTER his monopoly was broken up. Separating his empire allowed companies to compete and operate at levels that couldn’t previously. Enormous value was unleashed. And as the owner of little bits of each company, John D. saw his fortunes explode. He was the first American to ever be worth over $1 billion and donated over $500 million to charity upon his death.