Zinedine Yazid Zidane popularly known as Zizou was born in 1972 in La Castellane, Marseille, in Southern France is a former French football player who played as an attacking midfielder from 1996 to 2006. He presently coaches the Spanish club side Real Madrid.

Zidane started his career in the French club side Cannes before moving to Bordeaux where he established himself as one of the best players in the division. He then moved to Juventus in 1996 and his impact in the club was immediate, winning the 1996–97 Serie A title and the 1996 Intercontinental Cup. He was named Serie A (Italian league) Foreign Footballer of the Year in his first season and went on to have a successful career at the club.

He moved to Real Madrid in 2001 where he won the European champions league once and one La liga title. Throughout his career, He was voted the world’s best player on three occasions in 1998, 2000 and 2003 before he retired in 2006 after the world cup in Germany in which he led his team to the final.

As if his success as a soccer player wasn’t enough, he returned to the sporting scene few years after his retirement but this time as a coach. He was named the coach of Real Madrid’s academy team in 2012 and then took over the club B team in 2014.

However, he took over as the manager of Real Madrid’s first team in 2016 at a time when the team was in a bad shape and many doubted if he was the right man for the job but he soon silenced critics with his overwhelming success, leading the team to two and then three consecutive European champions league glory, two UEFA Super Cups, two FIFA World Club Cups, one Spanish title and one Spanish Super Cup, this feat made him the most successful coach in the club’s history.

He stepped down as the manager in May 2018, but he was gone from the post for less than a year, as he returned to manage the club in March 2019 and he led the club to a Spanish league triumph against all odds in the same season.

Zidane is considered one of the Soccer legends of all time due to his achievements both as a player and as a coach. He was the iconic figure of a generation of French players that won the 1998 World Cup and 2000 European Championship. After a brief international retirement, he returned to the national team in 2005 and captained France to the 2006 World Cup Final, where he won the Golden Ball as the tournament’s most outstanding player.

At club level, Zidane won the Spanish title and the UEFA Champions League with Real Madrid, two Serie A league championships with Juventus, an Intercontinental Cup and a UEFA Super Cup each with both Real and Juventus. He is, alongside Brazilian striker Ronaldo, the only players to have won the FIFA World Player of the year thrice aside C. Ronaldo and L. Messi who have won five and six respectively. He also won the Ballon d’Or in 1998. 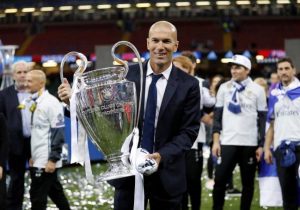 He was appointed a United Nations Goodwill Ambassador in March 2001, Zidane annually captains a team of soccer stars against a side led by fellow retired idol and U.N. Ambassador Ronaldo in a match for charity. In 2010, he also served as a high-profile ambassador of Qatar’s successful bid to host the 2022 World Cup.

Zidane has won everything both as a player and a manager.